For the fourth year in a row, Flathead Electric Cooperative’s Board of Trustees announced a zero percent overall rate revenue increase for all rate classes. Trustees approved a revenue-neutral change to residential rates, effective June 1, 2022, where the basic charge remains the same, energy charges will decrease slightly, and the demand charge will increase slightly.

The increased demand charges will be offset by decreased energy charges and will stabilize the overall amount of residential revenue collected. Residential members who manage their demand use may see their bills decrease. Likewise, members with higher demand during peak hours could see a slight increase in their bills. Overall, most residential members’ bills will decrease or increase by less than 1.5%, depending on how they use electricity.

This stability is in part thanks to the affordability of hydroelectricity, which comprises most of the Co-op’s fuel mix. Additionally, increased efficiencies at the Co-op, such as its paperless efforts — which saved the member-owned cooperative $293,500 in 2021 — contribute to continued rate stability.

“The Co-op exists to serve our members and communities, and this community is dealing with inflation, increased housing costs, and pain at the pump. We are pleased that overall rate revenue will remain steady for the 4th year running,” said Mark Johnson, General Manager, “and we will continue our long-range planning efforts, and hydropower advocacy, to keep electricity costs as low as possible.”

Over time, the Bonneville Power Administration (BPA) has changed the way it charges the Co-op for wholesale power, and the shift from residential energy charges to demand charges reflects that change. The Co-op purchases about 97% of its electricity from BPA, and pays a premium for power used during peak hours, the most expensive hours for the Co-op. As a member-owned, not-for-profit cooperative, the Co-op’s goal is to collect costs equitably from members.

The residential demand charge also gives members more control over their bills. Previously, using less energy was the only way to reduce bills. Now, shifting energy usage to non-peak hours, and/or avoiding the simultaneous use of large appliances during peak hours, may lower residential bills.

The residential demand charge, which will increase to $1.38/kW, is the amount billed based on the highest hourly demand (kW) measured during the Co-op’s peak hours in a member’s billing cycle. Peak hours occur Monday through Friday from 7 a.m. to 10 a.m. and 5 p.m. to 8 p.m. (no weekends or major federal holidays).

All non-residential rates will remain unchanged. To learn more about demand and rates, visit www.flatheadelectric.com/demand.

“I’m thrilled to be here in northwest Montana to highlight our progress in building healthier, more resilient forests through active forest management,” Gov. Gianforte said. “This announcement marks a much-needed milestone: a long-term, landscape-size forest management agreement among partners. When we actively manage our forests together, like we are in Lincoln County, we reduce wildfire risk, improve forest health, and provide greater predictability and certainty to the wood products industry.”

Representing the governor’s objective to increase the pace and scale of forest management in Montana, the expanded Good Neighbor Authority (GNA) agreement sets a goal to treat up to 10,000 acres a year in the Kootenai National Forest. The agreement was negotiated on behalf of the state by DNRC leadership and Libby Unit.

“The dedication and commitment to goals bigger than themselves is one of the key principles that staff of the Libby Unit share,” DNRC Northwest Land Office Manager Greg Poncin said. “We are very proud of the work they are accomplishing, but also in the initiative and innovation they illustrate by building programs, proactively seeking out funding, and hiring skilled people to carry out this work that is new and sometimes not well defined. They are leading the way and are collectively adding incredible value in this corner of Montana.” 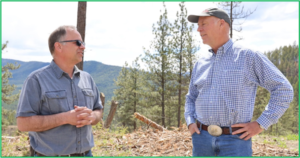