1789: Bastille Day – the French
Revolution begins with the storming of the Bastille Prison in Paris (now celebrated as France’s national day).

1864: Gold is discovered in
Helena, Montana.

1967: The Who begin a US tour opening for Herman’s Hermits.

1799: The Rosetta Stone is found in the Egyptian village of Rosetta by French Captain Pierre-François
Bouchard during Napoleon’s
Egyptian Campaign.

1900: A report appears in London that all foreigners in Peking, China, have been massacred. Although
soon exposed as false, the report helps mobilize support for relief
of foreigners.

1505: Martin Luther, theologian and founder of Protestantism, enters into an Augustinian monastery at Erfurt.

1948: US Air Force pilot Gail
Halvorsen encounters children at Templehof Airport in Berlin during the Berlin Blockade, giving him the idea to drop candy in ‘Operation Little Vittles.’

64: Great Fire of Rome begins under the Emperor Nero.

1290: King Edward I orders expulsion of Jews from England, this edict will remain in place for 350 years.

1864: US President Abraham Lincoln asks for 500,000 volunteers for military service.

1595: Astronomer Johannes Kepler has an epiphany and develops his theory of the geometrical basis of the universe while teaching in Graz.

1692: Five more people are hanged for witchcraft (19 in all) in Salem, Massachusetts.

1843: The steamship SS Great Britain is launched, designed by Isambard Kingdom Brunel, is the first ocean-going craft with an iron hull or screw propeller and the largest vessel afloat in the world.

1926: A convention of the
Methodist Church votes to allow women to become priests.

1969: Apollo 11 lunar module carrying Neil Armstrong and Buzz Aldrin lands on the surface of the Moon; Aldrin and
Armstrong walk on the moon seven hours later; Michael
Collins remains in orbit in the lunar module.

The memory of America’s World War II generation
is preserved within the physical memorial and through
the World War II Registry, a listing of Americans who
contributed to the war effort in uniform and on the
home front.

Names in the Registry are forever linked to the memorial’s bronze and granite representations of their sacrifice and achievement.

The WWII Registry combines four distinct databases. Three are official U.S. Government databases maintained by the American Battle Monuments Commission (ABMC) or the National Archives and Records Administration (NARA). These official databases include names of Americans who are:

– Memorialized on ABMC Tablets of the Missing.

– Listed on War and Navy Department Killed in Service rosters held by NARA.

The fourth database—the Registry of
Remembrances—is an unofficial compilation of public acknowledgements honoring U.S. citizens who helped to win the Second World War.

For more information and to search the online
database, visit wwiimemorial.com 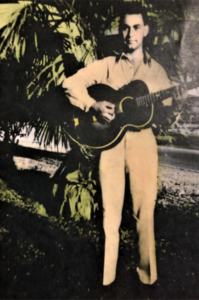 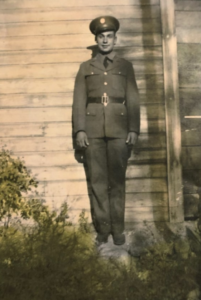 Submitted are two photos of my Uncle Charles Arthur Osborn taken in Hawaii in 1942 and for
consideration to be included in your looking back
series.

Uncle Charlie drew applause from neighbors who paused at the fence in Oregon as he broadcast his practice radio shows from the outhouse.

Moving to Troy, Mont. in 1937, the family living room held dances where he wiggled before Elvis made it cool and watched the kitchen door to make sure his mom never saw his complete act.

Drafted just after Pearl Harbor, he was saving his army pay to fund a career as a cowboy radio singer. Roscoe Garrison of Troy had KGA contracts and was ready to sponsor his Spokane show.

Uncle Charles could drop his cheeks to his heels and run like a red squirrel, firing a Tommy gun over his head to draw enemy.  He did this successfully until he did not zig-zag, the enemy could pot his path and dropped a mortar on him, and his malaria was cured.

He was the first World War II veteran killed in action (KIA) from Troy, but the papers from the
South Pacific Theater were beaten by word of KIA serviceman John Freeman for whom the Troy VFW Post #97 is named.