Last year, Hanna Beebe’s friend Sophie Lee was chosen to perform in the Honors Performance Series of Carnegie hall. She got to meet kids her age from all over the world, experience a Broadway show, and see some of the sights of the Big Apple. This year, Lee sent in a recommendation for her friend Hannah. “ Sophie loved the experience of being part of something so much bigger than herself, she said that everyone was very focused and worked together, there were no cliques or gossip.” Beebe told the Montanian.

This year, Beebe’s friend Sophie recommended Beebe apply, and so she did, filling out an application form which included answering the question “Why do you want to go? “ I took piano lessons, but I never was very good at it, but I’ve been in the select choir since 5th grade”, Beebe said. “ I want to pursue a career in music, and I thought this would  be good experience to put on a resume”, was part of her answer.

The Honors performance series of Carnegie Hall., sponsored by George Mason University, is a yearly opportunity for high school students from all over the world to  perform under the direction of world renowned conductors. Teens from small towns like Libby get to work with and befriend their peers from all over the world, and see a Broadway show to boot!   Teens will arrive in the big apple on January 30, rehearse most of the day, and see the sights on Friday and Saturday, then perform in the storied performance hall on Sunday Feb 2nd, Then return home on February 3rd.

Indeed,  for 16 year old Beebe, this is truly the chance of a lifetime. A Junior at Libby High, Beebe currently sings first soprano in the Libby High choir. She loves all kinds of music, but listens mostly to  alternative rock, indies pop, and Pop Culture, especially  artists like Sam Smith and The Faem. But Beebe also sings in a choir and so also appreciates  acoustic piano music. A Libby girl, she has been to big cities like Tucson, Arizona and Spokane, but never anywhere like New York  City.” Although an honor, all the participants are required to foot their own bills for the trip. “ both my parents and I are going, “ Beebe told the Montanian. “ we’ve had a bake sale, and are having a bingo night this week at the VFW she said, it been stressful to work out the money”. Still, the Beebe family is full speed ahead, and Hannah is very excited. “ I am looking forward  to experience the variety , culture and diversity of new York. Break a leg Hannah!! For more info on how to help Hanna by playing bingo, contact the Libby VFW.

for his involvement in the 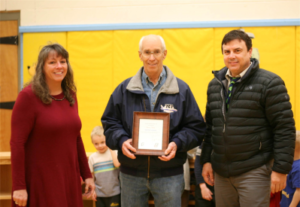 Left to Right: Peggy Rayome, George Gerard, and Craig Barringer pose for a photo after honoring George Gerard for his dedication and involvement in the Literacy Project. Photo by Angela Henderson.

George Gerard sponsored by the Libby Rotary Club has been providing books and made bookcases for four year old children in the Libby/Troy Head Start and Libby Public Preschool for the last eight years.  He has made 128 bookcases since the literacy project began in 2012.  The first few years only the Libby Head Start children received bookcases.  In 2017-2018 Libby Preschool was added and in 2018-2019 Troy Head Start was added to the program.

Each Fall 16 children are selected to receive a bookcase.  The books come with new and slightly used books. Libby Rotary Club received a grant in 2017 for $1000 to purchase books for the bookcases.  The goal of the Rotary Club has been to increase the literacy levels of our children in Libby and Troy.  Children need books in their hands.  It is key that children be read to daily, once they learn to read, it is key they read at least 15 minutes a day outside of school.

George was given an honorary plaque for his dedication to literacy in our community for children.

One person and seven dogs perish

On Sunday Dec. 15 a mobile home in Kootenai Vista Court of Kootenai River Road in Libby, Mont. Twenty four firefighter from the Libby Volunteer Fire Department worked quickly and actively to address the blaze, knowing a occupant could be inside.

Firefighters were able to gain access inside of the home where they found the victim; whom according to reports was the sole occupant. Seven dogs also perished in the house fire. The bodies of the dogs have been handed over to the Lincoln County Sheriff’s and Animal Control. The incident is under investigation.