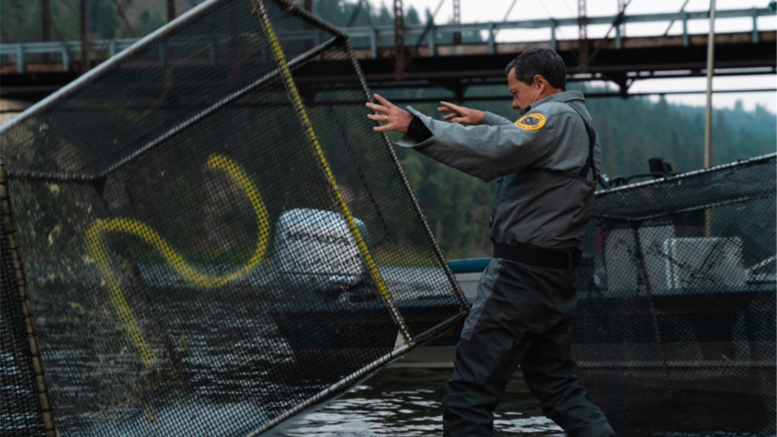 As the sun sets, Jim Dunnigan, Libby Dam mitigation coordinator for
Montana Fish, Wildlife and Parks, tosses a mesh bin into the Kootenai River in preparation for a night of electrofishing surveys. Photo by Sarah Mosquera.

On an overcast day in mid-June last year, Jim Dunnigan, dam mitigation coordinator for Montana Fish, Wildlife and Parks, stood on a concrete embankment overlooking the Kootenai River near Libby.

The high, gray wall of Libby Dam loomed to his left and a steep slope of boulders descended to the water in front of him. A colleague crouched by the river and returned with a dripping fistful of gray-brown slime, dropping it with an audible plop on a nearby bench. The two men teased apart the gooey mass, revealing rough, fibrous strands like wet cotton.

For the past 20 years, Dunnigan has watched as thick mats of Didymosphenia geminata — also known as didymo or “rock snot” — have blanketed the riverbed below Libby Dam, wondering what it might be doing to the aquatic ecosystem. The mats exist year-round below the dam, but growth peaks between February and May.

Didymo is a benthic diatom, a type of microscopic algae that clings to river rocks. Sediment cores and fossil records show that didymo has existed in the northern hemisphere for hundreds of years to millennia. But in recent decades, didymo has begun to “bloom” in rivers around the world, coating river bottoms with what looks like shaggy brown carpet. The phenomenon baffles scientists because didymo doesn’t act like normal algae.

Algal blooms typically occur when there is a high amount of nutrients in the water from sources such as sewage effluent or agricultural runoff. Didymo, on the other hand, tends to produce a thick mat when nutrients, specifically phosphorus, are low. Scientists are still looking for a clear answer to what triggers the blooms, which are occurring more often and in more places. A growing body of research links them to climate change.

But while the cause of the blooms remains elusive, Dunnigan’s new research has identified one of the blooms’ effects. The study found that nutrient availability and winter didymo blooms are the top variables tied to stunted rainbow trout growth. Trout size impacts FWP’s constituents, namely anglers, but Dunnigan says the larger issue is Libby Dam, which is creating a nutrient imbalance that impairs the aquatic food web. To fix the problem, Dunnigan recently proposed a curious solution: adding fertilizer to the river.

“Adding nutrients to a system is, to most stream ecologists and biologists, going to elicit a negative reaction.” Travis Schmidt, USGS Research Ecologist.

Libby Dam blocks 80-93% of upstream phosphorus from entering the Kootenai River. Phosphorus is an essential building block for algae, which provides food for macroinvertebrates and fish. By holding back phosphorus, the dam also creates ideal conditions for didymo blooms. Dunnigan’s theory is that the blooms drive away larger bugs that fish like to eat, which in turn limits fish growth. By installing a fertilizer drip below the dam, Dunnigan hopes he can reduce didymo blooms and restore a healthier food chain, from algae to insects to fish.

Adding nutrients to support fish in the Kootenai River basin is a strategy that has been tried before. Two other government and tribal programs currently add commercial-grade fertilizer to the watershed: one 50 miles downstream just over the Idaho-Montana border and the other in Canada’s Kootenay Lake. These nutrient addition programs were created, in large part, to replace nutrients trapped by Libby Dam and to restore fish health.

Dunnigan’s proposal is to add fertilizer at the Libby Dam outflow for five years, assess the results, and then decide whether to continue. If approved, the program would be the first of its kind in Montana and the only nutrient addition program in the Kootenai drainage in response to the impact of rock snot.

At first glance, adding nutrients to waterways goes against what many scientists have been taught. Travis Schmidt, a research ecologist for the U.S. Geological Survey’s Wyoming-Montana Water Science Center, says using nutrients as a restoration tool can feel wrong when so much of the world is focused on keeping nutrients out of rivers to discourage harmful algal blooms, which can suck oxygen from aquatic ecosystems and degrade water quality.

“Adding nutrients to a system is, to most stream ecologists and biologists, going to elicit a negative reaction,” Schmidt said.

But, he adds, the Kootenai River’s low-phosphorus environment is unusual and may require a different type of management to mitigate the dam’s effects, including didymo blooms.

“In the absence of [adding nutrients], I don’t know how you solve the problem,” Schmidt said.

RIVER SCIENCE: Back at his office, Dunnigan scrolled through spreadsheets of data on his computer.

On his door hangs a carved wooden sign that reads “Gone Fishing.” A sticker fixed to the door frame advises, “Use Biology to Manage Fish and Wildlife.” A row of well-worn textbooks with titles like “Biostatistical Analysis” and “Age and Growth of Fish” stocks a bookshelf behind his desk.

“I got into science because I was interested in figuring out how nature worked,” Dunnigan said.

Dunnigan has worked for Montana Fish, Wildlife and Parks for just over 20 years and is now one of the most senior biologists on staff. And he recognizes that FWP has limited power when it comes to decisions that affect the river.

“We’re a small cog in the wheel of that process,” he said, explaining that the Army Corps of Engineers operates the dam and the Bonneville Power Administration sells the electricity it generates. FWP is charged with fulfilling a specific state mandate: to conserve and provide opportunities for Montanans to enjoy fish and wildlife resources.

The 37th Montana Science Olympiad was held on April 15th at Montana State University in Bozeman.  The Science Olympiad is an academic interscholastic competition which involved 28 high school and 31 middle school teams this year in a wide range of events involving all science disciplines.  The goal of Science Olympiad is to improve the quality of science education, increase student interest in science and provide recognition for outstanding achievement in science by students.  The students choose from fourteen possible events.  Some events involve building and testing while other events involve researching specific topics.  Libby was represented with nine high school and eleven middle school team members this year.

The Libby Middle and High School teams made an excellent showing at the state tournament at Montana State University placing in the top ten in twelve events. A highlight this year was the third place medal won by Wyatt Thompson and Piper Thompson in Ornithology.  Wyatt and Piper had to  describe the anatomy, physiology and behavior of birds as well as identify bird specimens and birds by the sounds they make. Another highlight was the fourth place finish by Teague Thompson and Ashley Cockerham for their Mousetrap Vehicle that needed to be calibrated to autonomously move forward and backward a specific distance powered only by a mousetrap.

The Libby Science Olympiad team would like to thank Gear Up for providing financial support and transportation which made the trip possible and a special thank you to Adam Kirchenmann, a graduate of Libby High School and Montana State University, who provided invaluable coaching advice and expertise.

“Our government does nothing for us!”  This was a common lament that members of the Rotary Clubs of Northwest Montana heard on a recent trip to Guatemala.  Things most governments provide — schools, clean water, health systems – are in short supply in this Central American country.

Members of the Rotary Club of Kootenai Valley and the two Kalispell clubs listened as villagers from three areas gave them details about their needs mostly dealing with water and education.  The clubs gathered information for three projects.  They agreed to accept one and are asking for more information on the other two.

The project they are undertaking concerns a public grade school which is lacking rooms for the students.  There are 375 students in the school but there are not rooms enough for so many.  Two of the classes are held in the hall ways.  The Rotary Clubs will help build two new classrooms and bathrooms and put up a fence behind the school to better protect the students.

The Rotary Foundation, which the clubs rely on to help fund their endeavors  does not cover anything but water projects.  So the clubs will have to raise all the money themselves.  The parents and others who are skilled laborers will provide the work for this project so it will not be as expensive as others have been and the money can be raised through donations.

Another school project was suggested to the members.  This building needs a new roof and the villagers have agreed to each contribute a certain amount to cover the cost of that.  But the building is old and needs some repairs.  The Rotary members are considering funding this project depending on the cost.

The third suggested job is a water project.  There is water in the small village but it is non-potable.  They can use it for washing clothes and dishes and other necessities but not for drinking or cooking.  This one could be funded with help from the Rotary Foundation but will be more expensive to fund because a well will have to be drilled.

This is what happens when the government of a country ignores the needs of indigenous villages.  People must come in from other countries to try to solve the problems caused by poverty.

The Rotary Clubs of Northwest Montana have a great reputation for accomplishing projects that help poverty stricken people in Guatemala.  The needs are heart-wrenching but one village at a time, progress is being made.